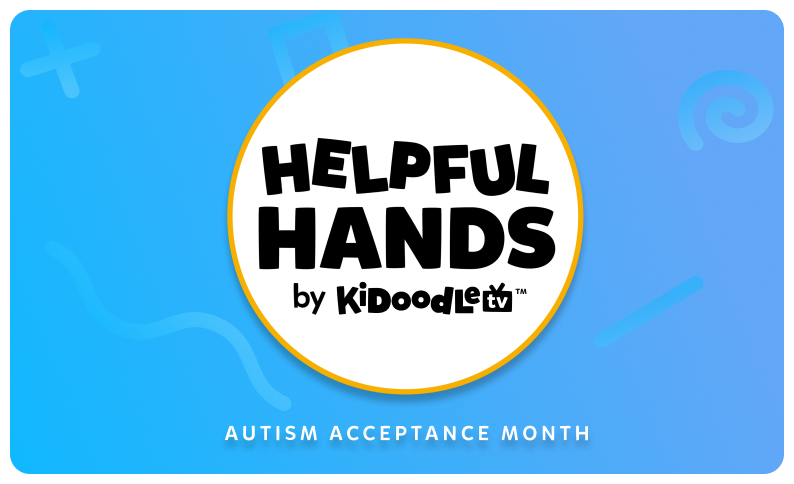 This April, we’re lending our support to raise awareness for Autism Acceptance. If you’re wondering why we’re calling it “Autism Acceptance Month” instead of “Autism Awareness Month,” Christopher Banks, President, and CEO of the Autism Society of America, puts it like this:

“While we will always work to spread awareness, words matter as we strive for autistic individuals to live fully in all areas of life. As many individuals and families affected by autism know, acceptance is often one of the biggest barriers to finding and developing a strong support system.”

Christopher Banks, President, and CEO of the Autism Society of America, 2021.

Word choices and phrases are simple but extremely important ways for us to foster acceptance and inclusion, like using people-first language.

Entertainment is another useful tool for individuals living with Autism Spectrum Disorders (ASD) of any age. Some of the shows available on Kidoodle.TV offer calming sensory immersion, or help to develop interpersonal and social skills. Join us, in celebrating Autism Acceptance month with these shows.

Now streaming on Kidoodle.TV, The Go Go Brothers, a series all about creativity and adventure, starring two brothers who jump into a world of imagination based on real-life illustrations submitted by children around the world. Hear from the boys’ parents on what inspired the creation of this unique and inspiring series.

“’The Go Go Brothers’ is a story of two young boys who longed for a place to escape to a world of imagination. Rooey was diagnosed with Autism and ADHD. Bean Boy was born with Spina Bifida. As the boys grew. their sense of confidence began to fade. We quickly realized art is the key to imagination.  It is a language that knows no boundaries. Through ‘The Go Go Brothers’ animated series we are able to use the artwork of children across the globe to create a world of endless possibilities. It has proven to be a very therapeutic adventure for our family, as we’ve seen improvements in the boys’ social skills, cognitive development, and acceptance of all the differences that make our real world so unique. Now is the time to help your family experience the same.”

Lil’ Doc is a series of animated shorts that help explain medical topics to children. Season 01, Episode 07 of Lil’ Doc titled, “The Autism Spectrum” describes how the brain reacts or responds to different messages in people living with an ASD.

Brady and Laurie present “Soft Things,” a song made for celebrating Autism. This comforting song reminds us of the reassuring, soothing things that bring stability to our days and peace to our souls: a favorite blanket, our loving pets, beautiful music, best friends, and more.

Meet Max Park, America’s Champion Rubik’s Cube speedsolver with numerous Guinness World Records titles including the fastest time to solve cube sizes from 4x4x4 through to 7x7x7 and the fastest average time to solve a Rubik’s Cube one-handed. Max has also been diagnosed with autism. In this episode of Guinness World Records Rubik’s Records (S1E02) hear from Max’s parents talk about their son’s love of cubing.

Monsikids is an animated series about identifying emotions. The show was crafted by a team of child psychologists, designed to help kids understand how they are feeling. Each episode features tips on how to cope with difficult emotions like anger, envy, self-esteem and fear.

Molang is an adorable show about two kind and affectionate animal best friends, Molang & Piu Piu. Children with ASD often have a harder time reading body language and facial expressions and Parents of kids with ASD have noted this show is perfect for learning to recognize visual cues and read emotional expressions.

Autism Speaks Developmental pediatrician, Dr. Amanda Bennett, writes about a common interest in trains appealing to individuals of all ages living with ASD. She writes, “trains can appeal to individuals whose sensory interests include watching objects spin. [Trains] can be categorized into different models, types, sizes, etc. For some individuals with ASD, the ability to organize objects into categories is very appealing.” Bob the Train is a short-form musical show that offers bright colors and characters singing along to classic nursery rhymes.

Lucy is a little girl who lives at 64 Zoo Lane, right next door to the local zoo. Every night, Lucy meets with the animals who impatiently await their turn to tell her about their colorful adventures. Several ASD parenting bloggers have mentioned this show as a great kid’s show that offers calming visuals and sounds to easily follow along.

Little Bear is an animated series based on the popular children’s books, starring a 6-year-old small, curious, and imaginative grizzly bear cub who lives in the forest with his family and friends. This series has been mentioned as a long-time favorite for individuals living with ASD.

Guidelines on talking about Autism

How to Support Children with Autism with Special Interests

Helping Children with Autism Get the Most out of Digital Media

Any cookies that may not be particularly necessary for the website to function and is used specifically to collect user personal data via analytics, ads, other embedded contents are termed as non-necessary cookies. It is mandatory to procure user consent prior to running these cookies on your website.